Peter Tosh is kind of a forgotten giant. He was founding member of The Wailers and recorded some classic albums as a solo artist, but he hasn’t been able to promote himself and grow his legacy on account of being dead. Now, Bob Marley is dead too, but apparently his heirs and offspring are thorsty and business savvy above and beyond most people’s capabilities. I don’t see whoever’s in charge of Tosh’s estate trying to plaster his face on a line of vanity bongs. I suspect, though, that Tosh would have found that sort of aggressive profiteering very vulgar and antithetical to his philosophy. It’s better to be well known to a few for the power of your message than vaguely known to the masses for nothing more than the image of your face. Pick yourself up, dust yourself off. Start all over. That’s great advice from Peter Tosh. And it couldn’t be more universal or basic. In the video (circa 1978), we hear the track opening with lines from scripture, and we see Tosh wearing a robe and keffiyeh. For what reason, I don’t know, or what the political context back then might have been. It may be a show of solidarity for victims of the conflict between South Lebanon and Israel or the conflict between Egypt and Israel, both of which were happening around this time, or a reminder of the common roots shared between Rastafarian, Christian and Muslim faiths. Whatever the specifics, the implication is that the message isn’t merely to try and have a nice day. It’s to try and fight another day, despite oppression, despite violence, despite hopelessness. 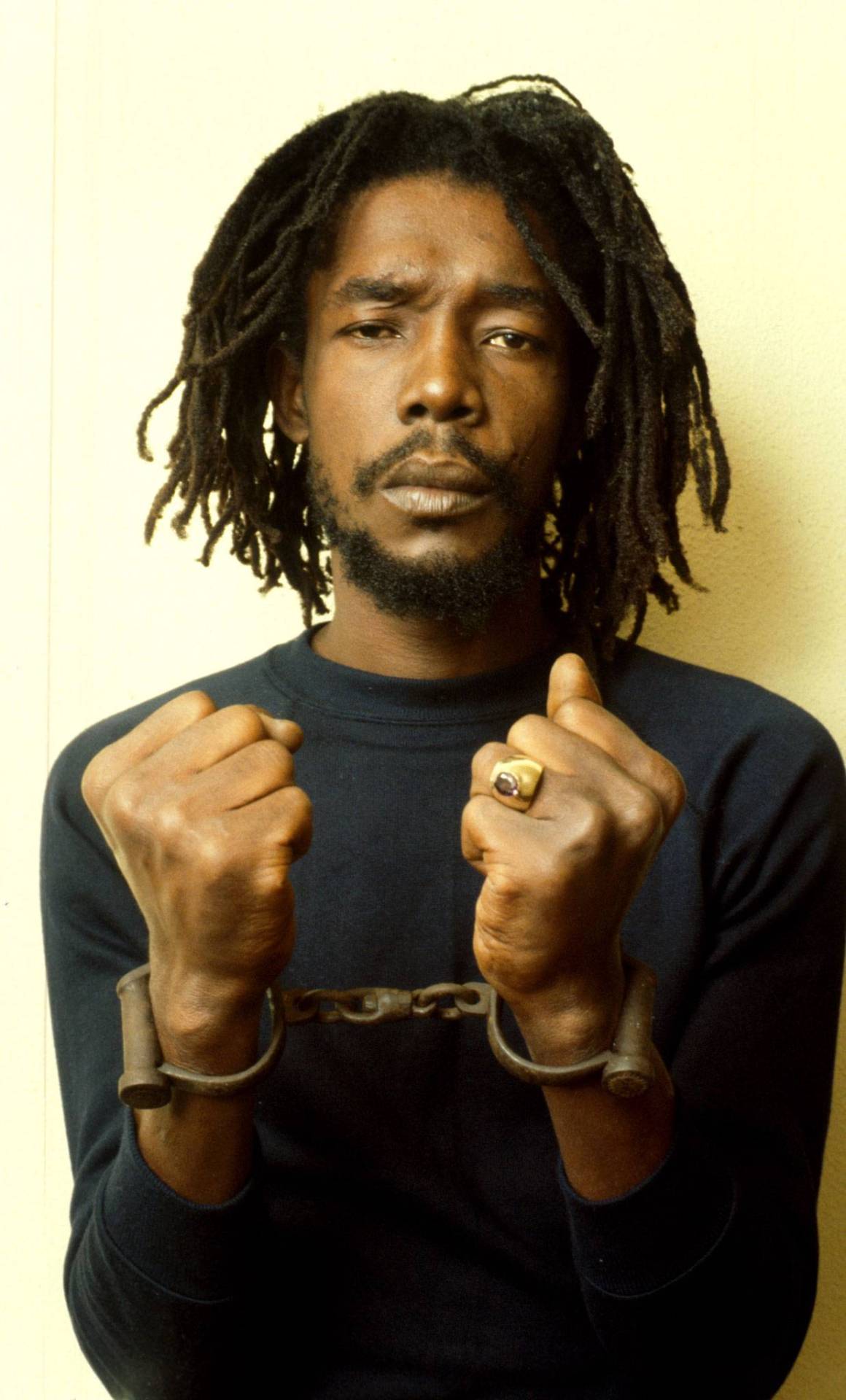 And this is where Peter Tosh leaves me and my limited understanding of Ras culture in the dust. In other words, what? I strive to get a grasp of the context and meaning of the music I listen to, to the best of my powers, but when the singer leaves English behind, I can’t really follow. Tosh is not an artist whose each and every most obscure song has its own in-depth Wikipedia, so here I have to turn to the wider interwebs for help.  Is it a political call to arms or a spiritual message? Something of a personal nature? Lines from a Hollywood musical? None of those. It’s Jamaican slang for toilet paper, aka what seems a very mild and gentle expletive. So Peter Tosh is so aggrieved at the ugliness and injustice of the world he sees around him, he can’t help himself uttering curses. He’s basically shaking his fist at the sky and hollering “Buttwipe!” into the void. I have to laugh a little at the absurdity of that. To us, ‘buttwipe’ is an insult a grade school child would resort to, but apparently the Rasta don’t go in much for rough language and bumboclaat is considered an extremely vulgar thing to say. To Tosh, who was nothing if not earnest, this is the strongest language he could choose to carry the force of his discontentment. I do hope he got a bit of a giggle out of it, though. You gotta get at least a little chortle out of having ‘The Buttwipe Song’ on your track list. Peter Tosh, dancing around in his hot pink pajama suit, doesn’t look like a terribly scary figure, but through the power of his words he was terrifying enough to some people that he had to be silenced. Many believe that his death was a political assassination. That may or may not be true, but it’s not entirely farfetched. Tosh presented a vision of black power, grassroots power, that was and remains terrifying to those who hold political power. Tosh spoke of a unified Africa, a unified and proud African people. There can be, of course, no such thing in a literal sense; Africa is a huge and diverse continent that’s home to far too many cultures to ever be merged into one. It’s more of a metaphorical vision, a call for people of African descent, wherever their home in the world is or what culture they belong to, to stand and take pride in themselves and to demand respect. That was too much to ask for in 1983 and it’s still too much to ask today, if headlines are any indication. The people doing the loudest asking are still liable to catch a bullet. But that doesn’t mean they should stop asking. Peter Tosh is still relevant and galvanizing, because Africans are still not free. On dope, you say? Peter Tosh was just doing his part in propagating weed culture. He didn’t live to see any results from his calls to legalize it. In fact, it’s been decades, and we’re still just taking baby steps. First step; acknowledging that weed is not the gateway to all evil. As Tosh pointed out, in a song released way back in 1979, there are plenty of worse things a man could be doing, ranging from hardcore drugs like heroin to the constant ingestion of hamburgers and soda pop. And back then, we weren’t eating nearly the amount of those things that we do now. Neither did we know how toxic it is to do so. Peter Tosh didn’t know those things either, but he was making a statement about the American-led global wave of cheap, cheesy, meaningless instant gratification. Keeping in mind that as a Rastafari Tosh would have viewed smoking as a spiritually significant activity, it’s easy to see why he places soda pop consumption on the same unwholesome level as heroin and cocaine. He was ahead of his time. Bible study time with Peter Tosh. Normally, you’d lose me at Bible study, but this is Tosh, and Biblical themes were a big thing for him. I’m familiar with the story of Moses, and vaguely aware of those other guys mentioned in the song, but how they all tie into Rastafari, I’m not sure. Though I know Ras has deep roots in the Old Testament, the exact theological relationships escape me. Nor is this the time and venue to delve into a study of the Abrahamic faiths. But do keep in mind that Reggae music wasn’t just invented to sell tie-dye objects to gullible American stoners, and no, the Rastafari faith is not waiting for you as a fun-loving alternative to the usual Judeo-Christian mumbo jumbo. They are fun-loving, but they also do study the Bible, and also, trust me, they don’t want you. But doesn’t Matisyahu being a thing make a lot more sense now? Legalize what? If you have to ask, you’re clearly not the intended audience here. But I doubt anyone would be dense enough to not know what it was Peter Tosh wanted to legalize. Fighting for the legalization of marijuana was a big part of his activism throughout his career, and it remains a big part of his legacy. Tosh fought for other things too, but his pro-ganja songs remain his most famous. Some people believe that it was Tosh’s activism and outspokenness that earned him a fatal bullet, others think it’s just a conspiracy theory. Though there isn’t any proof that his death was a political assassination, it’s entirely possible that it was. Tosh was one of Jamaica’s most prominent public figures, and he didn’t hold back on criticizing the government. Furthermore, people paid attention to what he had to say, not just in Jamaica but all over the world. He was making Americans pay attention to Jamaican problems, such as deep poverty, widespread corruption, police brutality, etc, and since no corrupt political regime wants America breathing down their necks, it’s probable that he made some powerful people very nervous. If that sounds far-fetched, please recall that around the same time, in prosperous politically stable America, the F.B.I. was busy keeping tabs on possible troublemaker John Lennon. Lennon’s advocacy for peace and love may strike you as harmless, but it was enough to get him under government watch. Lennon and Tosh did have a lot in common as cultural figures, in the sense that they both had passionate beliefs which they expressed in such a way that a great number of people were affected by their words and inspired to share those beliefs, which to some eyes is a very dangerous talent to have. They were both artists who had the power to shape people’s views, and took on roles of spiritual and ideological leadership. There’s no question that Lennon’s murder was just a tragic coincidence. In the case of Peter Tosh, there’s a high probability it was no coincidence that he was shot down in his own home, just as his public status had risen enough for him to have genuine influence in the world.