Of all the irrational prejudices in musical taste – something we all have! – my oddest might be about Elvis Costello. Nothing personal against him at all, he seems like a real swell guy. I’ve just always felt convinced that listening to any of his … END_OF_DOCUMENT_TOKEN_TO_BE_REPLACED

Elvis Costello wants to chop off your head, take your job and steal your girlfriend. None of which things he appears the least bit qualified to do. He’s just an angst-ridden nebbish in an ill-fitting suit, fussing about the world’s injustice. 1979 was a really … END_OF_DOCUMENT_TOKEN_TO_BE_REPLACED

When I was a child I went through a weird phase when Elvis Costello’s Armed Forces was my favorite record. It’s hardly children’s music, but I responded to the catchiness of it, not having any clue what a word of it was about. This song … END_OF_DOCUMENT_TOKEN_TO_BE_REPLACED

There should be a specific category for my favorite albums by artists I’m actually not that into. Either because it’s part of a movement I’m just generally very fond of, like first wave New Wave and post punk, or it recalls a moment in my … END_OF_DOCUMENT_TOKEN_TO_BE_REPLACED

The Chelsea is probably the most storied hotel in the world. Sure there are Hiltons and Ritzes and other fancy, glamorous places, but none of them has the cool cred of the Chelsea. Andy Warhol memorialized it in film, Lou Reed and Leonard Cohen wrote songs about it, Janis Joplin stayed there, Valerie Solanas lived there, Nancy Spungeon died there. Among many, many other luminaries and not so luminaries. But Elvis Costello is not impressed. Even though he’s seen the movie. I suppose Costello had to call the place out on its superficial veneer of  clubby glamour, its weird rock’n’roll exclusivity. If all the cool kids had to go there, Elvis Costello would counter-cool them by not going there. Or something. I imagine he probably went there anyway, just to see what all the fussing was about.

Here, feast your senses on the spectacle of Elvis Costello being what today’s marketers would call ‘adorkable’. What precisely his deal was, I don’t know, but I suspect there may have been a level of irony in there somewhere. Was Costello the first hipster? He was definitely a trailblazer – he was one of the first to contrive to be cool by being uncool. There was also a genuine effort to be cool; if he’d wanted to maintain maximum uncoolness, he’d have kept his birth name. Because you can’t get any uncooler than Declan McManus. The visual image was cribbed from Buddy Holly, but here it gets complicated. The homage with the big glasses is supposed to be an avowal of proud nerdiness and, as with everything these days, irony. Except that Holly wasn’t a nerd at all – he was charming, popular and classically handsome, and in his day, horn-rimmed spectacles were non-ironically fashionable. Evidently by the late seventies fifties-referencing retro was already a thing. I guess establishing a respectable image without aligning yourself with punk in 1977 was tricky. Costello did pull it off with panache – smarter that the punks, cooler than the nerds, retro yet with-it, and a fuck-you-I’m-not-cool attitude that had the desired effect of coolness. Though, as I’ve said before, Mr. McManus is not naturally blessed with great coolness and after the first few records stopped making any pretense of being so and now he’s so happily uncool he barely qualifies as a rock star anymore.

Don’t ask me why I stopped liking Elvis Costello after his first three albums. I liked the first two fairly well, and Armed Forces blew me away. Then, after that, it just wasn’t as good anymore. Maybe it’s my own perception. Armed Forces hit me when I was at an impressionable age, so perhaps everything else is equally as good but simply never got the chance to impress me when I was so mentally permeable. Or maybe Elvis Costello is just generally kind of lame and it’s a fluke he made one brilliant album and couple of decent ones. Anyway, he’s so genteel now, him and his upper-class piano lady wife. The albums I like all date to the late seventies and though they’re too good to be punk, they’re suffused in punk spirit and genuinely rock and roll. The problem with Costello may be that he’s too much of a nebbish to really be a proper rocker. He just lucked into being part of that generation and it worked for him, for a while, then he had to retreat back into his natural nebbishness. I see Joe Jackson as being the same way. Jackson also started out all fired up by the punk revolution, then realized what he really liked was jazz. Or look at Paul Simon, who never made the slightest pretense of being anything other than a college campus joe-schmoe. Elvis Costello is one of those guys who was never meant to be a rock star in the dramatic, glamorous, dangerous, hedonistic, Robert Planty sense of the concept. He happened to be cool for a little while, but that’s not his bag. He’s just a dude with dorky glasses.

Speaking of great albums…I’ve stumbled upon this thing called 1,001 [Things] to [Experience] Before You Die. Things in this case being albums to hear. (Other titles include books to read and movies to watch.) So, of course, I was curious. I downloaded not the whole schmeer but a random chunk of it, comprising a period between 1978 and 1982. And I’ve been torturing myself with it ever since. Right now I’m on number 435 on the list, Talking Heads’ Fear of Music (I started at 401.) I’ve learned a few things, for sure. First, AC/DC is just as intolerable to me as ever, but now I can boldly say that I’m not just basing that judgement on the intolerability of one single but a whole album’s worth of intolerability. Obviously, the records I’ve enjoyed the most are the ones by artists I was already all into, like Springsteen’s Darkness On the Edge of Town; This Year’s Model by Elvis Costello; Q: Are We Not Men? A: We Are Devo; and The Cars’ eponymous debut. This being the punk era, there’s a lot of punk/post punk on the list. The punks, from The Adverts to X-Ray Spex, all sound boringly the same. There’s also the realization that the reason I can’t get on board with Van Halen or Willie Nelson isn’t because of the music, which on its own merits isn’t all that bad, but just because I feel no attraction towards their respective personalities. There are interesting questions that arise. It does make sense that if you have to listen to an album of pure disco, you might as well make it Chic or Sister Sledge. But who decided that Willie Colon and Ruben Blades‘ Siembra is the only salsa album I have to ever hear before I die? The biggest surprise so far is how much I enjoyed Thin Lizzy’s Live and Dangerous, the fun in which is how much it reminds me of Spinal Tap. So, that’s my ongoing experiment in listening to supposedly great albums by people I otherwise wouldn’t touch with a ten foot pole.

Elvis Costello has also written a song about the Chelsea. His is about not wanting to go there. There’s a cute video to that song. Does he or does he not look like Milhouse Van Houten? Did you know he grew up and married Diana Krall? Diana has a song about wanting a man who ‘loves me like a man’ or something, and that makes me laugh so hard because I know she married this dweebus. But that’s not what I came to talk about today. Today’s song is Chemistry Class from Armed Forces, the best album Costello and cohorts ever made. Armed Forces is one of my top favorite really great albums in general, and in the top five of Really Great Albums By People I Otherwise Never Listen To.  (That list also includes Doolittle by the Pixies and Little Earthquakes by Tori Amos, among other things. ) 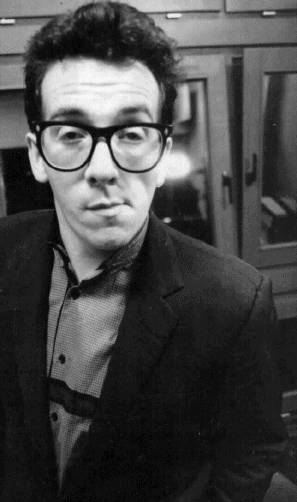 Why can’t Elvis Costello still be as good as this all the time? Or ever again?