You can’t have a conversation about New Wave music, the 80’s, or the joys of Aquanet without a shoutout to Duran Duran, who are the high gods of all of those things. They got there by being the best at what they do. They were the best at melding spiky post-punk rock music with catchy newfangled synthpop. They were good musicians, unlike a lot of their synthpop peers. They had the best suits and the prettiest makeup. Their music videos were the most tastefully risque. And pretty much all of their albums up until a mid-90’s slump laid them low had been consistently good and still hold up. These guys were real heartthrobs in their day, weren’t they? This is Duran Duran’s debut single and my, don’t they look yummacious? 1981 was just the mere beginning of the New Romantic movement (which is referenced in the lyrics) and Duran Duran was right on the razor’s edge. Looking pretty was always one of their main selling points, even to this day, but if they’ve managed to age surprisingly well, it’s because their songs still hold up without the frippery. This song is pretty dumb, as are most of their songs, but it’s got the magic of good pop, and it’s not the disposable kind. There are so many 80’s pop songs and acts whose appeal is mainly to allow us to gawk at how strangely different and goddamn long ago the 80’s were. Duran Duran has been one of the most enduring 80’s pop groups because you may gawk at their fashion choices, but their music is actually largely untainted by the worst trends of the time. 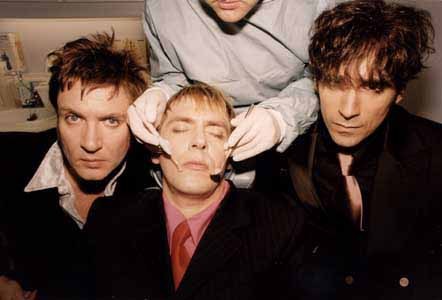 Duran Duran won’t be around forever, but in the meantime, they’re still around and they haven’t changed much. 1987, 1997, 2017 probably. Honestly, if you’re not a die hard, you can skip pretty much skip the 90’s; the 90’s were for 80’s music what the 80’s were for 60’s music. That is, everyone was left scrambling to stay relevant, experimenting with ill-advised trends and wondering where the hordes of screaming teens disappeared to. (Blockheads, they grew up!) So it was that Duran Duran experienced poor sales, bad reviews, lineup changes, record label drama, the indignity of trying to find more with-it hairstyles. I still enjoy their work from the time, though, obviously, not as much as their classic work or their most recent. Frankly, my main thing to point to with this track is the video; it’s very very intensely 1997 high-fashion. Clearly someone was paying close attention to the runways (that someone was Simon Le Bon, husband of Yasmin) and saturated themselves in the heady post-new-romantic-new-romantic aesthetics of Alexander McQueen and John Galliano. I also think that it’s a great aesthetic for Duran Duran and it suits them really well and it’s really too bad that they were at their least relevant at that point and nobody rewarded them for looking so good. Late 90’s fashion is dear to my heart! Bear with me. I bet you forgot that Duran Duran still exists. You might remember them for their neon bright 80’s heyday, but you don’t think of them as actually still existing. As it happens, though, they are still a working band. On their latest album, Duran Duran sound just like themselves (which they’ve been doing with admirable consistency over the years.) How much you enjoy Paper Gods will depend on how wholeheartedly you enjoyed Duran Duran in the first place, or if you weren’t alive the first time around, how wholeheartedly you appreciate that classic 80’s New Wave sound. You may also love or hate this track based on those same criteria. It combines some of the classic Duran Duran elements; like Simon Le Bon’s plastic soul vocals and nonsensical vaguely creepy lyrics. Clearly, the band has lost none of its campy pop-art aesthetic. If this and other slow songs seem to veer into Broadway showstopper territory, it actually suits them. Who’d have thought that Duran Duran would be so enduring? So many of their peers have faded into oblivion, and these guys are still making (good) albums. Yet, it’s actually not that much of a surprise. Besides being the very prettiest of the pretty boys, they also happened to be one of the best new wave bands, and that holds up long after the makeup smears have faded. Good music plus glamour equals memorable. You can dance to it and aspire to the imagery. I can’t pretend that this has a lot of depth or even that it makes any sense, but it rocks, head and shoulders above most everything else that washed ashore in 1986. Also, look for a very young Christy Turlington as one of the scantily clad dancing girls. Duran Duran sure embodied a lot of things we remember about the 80’s, from their taste in hairstyles to their association with the art of Patrick Nagel. Yet, style overload aside, their music still endures, having aged remarkably better than a lot of their brothers in hair spray. More surprising still, Duran Duran itself has endured as a unit, remaining consistently productive since their heyday. They’re still putting out records on the regular, and still commanding top models to appear in their videos. You know it’s a Duran Duran video when the band members are prettier and more lovingly photographed than the model they’re suppose to be stalking. Because Duran Duran videos are always about stalking models, are they not. That said, it’s still a damn sexy song. There’s an undeniable appeal to the fantasy of cracking someone’s icy facade to find the passion hiding beneath. Applied to real life, that usually just means finding out that the person you’ve been crushing is secretly insane and very good at hiding it, but pop songs and real life don’t always overlap much. There has been many, many a pop song that passes as romantic sentiments that would land you in jail if you expressed them out loud in front of real people. Because pop offers a level of escapism that allows you to wallow in your stalky fantasies without considering the pesky reality that stalking is super fucking creepy and totally illegal as well.