This is why the Rolling Stones were the best of the British blues bands. They play blues like their brakes and their steering don’t work. It’s always ride or die with them. Besides their sloppy garage band vibes, there’s always Mick Jagger’s cheeky insouciance. He’s bad and feels absolutely no shame. He will make you a bunch of doe-eyed promises and then forget them all for the first bottle-blonde who walks up to him. That rake’s confidence has carried Jagger through decades of scandals, and the little flies still can’t wait to hop right in. It is, of course, irresistibly sexy.

Remixing is all well and good, modernizing old things for young ears, but some works need no help. Some works are already so modern in their drive and immediacy that it’s like there’s no such thing as changing times. Nina Simone, of course, almost singlehandedly kept jazz music relevant in the 1960’s, when the rock’n’roll youthquake was sweeping away everything minted before 1963. The reputation jazz had acquired for being pompous and louche and the domain of squares who still wore suits and strings of pearls – Nina Simone swept that aside, showing how fierce and subversive jazz could be, how deeply political and historically significant. She tied her music to her political activism, and to her personal struggles as a mentally ill black woman artist trying to make it in unforgiving America. Sinnerman is one of her best known works, a masterpiece in sustained emotional force. It is also, importantly, a traditional Negro spiritual rooted all the way back to times of slavery, grown into a gospel standard during Simone’s childhood, and rearranged as a jazz number in the 50’s. It is in no way ironic that a 1965 recording of a song with a history that may stretch back centuries sounds so unbound by time; things that are deeply important don’t get withered by small things like changing trends.

It’s Mick Jagger in the persona we know best: a smug fuckboy who knows he can be a dick and get away with it because he’s got boundless sexual charisma. Mick Jagger is the best kind of fuckboy, the kind who is absolutely gleeful and unrepentant, fully confident he’s got what girls – and boys! – want. As opposed to the other types, the insecure whiny ones who rely on fake sensitivity and postures of vulnerability in an attempt to make themselves seem harmless and appealing. Nobody wants a wolf in sheep’s clothing, though, everybody just wants the wolf. Or the sheep, some people are into that too, nothing wrong with a little lamb, as long as it’s authentic lamb. But yeah, in the real scheme of things, all the little red riding hoods can’t wait to line up to get eaten by the sexy cocksure wolf. You can call it problematic all you like, but it’s the way of nature.

This is where it all began. It’s the first single by the group then known as The Wailing Wailers, and a #1 hit in Jamaica in 1963. It would be another decade before the rest of the world caught on to what The Wailers were wailing, but Bob Marley’s career was slowly catching afire. You would never guess from this rather raw-sounding track the global influence Marley would eventually attain, nor would you guess it from their dorky and clean-cut appearance in those days. But the spark is there. It’s there in Marley’s assertive vocals, and it’s there in his songwriting. Although Jamaican artists back then were still encouraged to model their appearance and their writing on American vocal groups, Marley is already writing about the things he cared about. This song, in what would become typical Marley fashion, appears to be about personal stuff – it sounds like he’s breaking up with a lover – but was actually inspired by and directed towards the violent ‘Rude Boys’ of Marley’s hometown Kingston. Even then, Marley loved his community, but was disgusted by the poverty and political oppression there, and hated the violence that resulted from those things. And even as a rookie artist struggling to make his name, he was already clear on the message he wanted to send: simmer down, people, you can’t stand up for yourselves if you’re fighting amongst each other.

No matter how dreary and down you are, a little Motown music will lift your spirits. There’s just something about that swing. If it’s all grainy and sounds like someone forgot to wipe the dust off the vinyl, all the better. That makes it feel like history you can dance to, which it is. Also, when Jr. Walker says ‘shotgun’ he means his penis, and that’s a metaphor that never goes out of style. 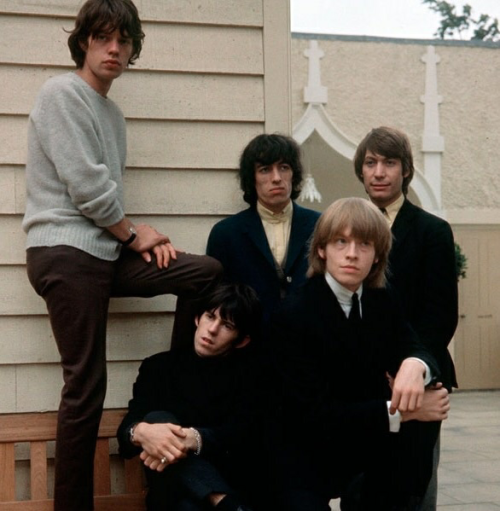 I’m currently in the early chapters of reading a biography of Mick Jagger, not because I think there’s anything new left to learn, but because it’s a story I never get tired of revisiting. Jagger’s decades-long-and-counting notoriety has always been fueled by sex, as much if not more so than music. He’s had an awful lot of women saying ‘yeah’ to him, often without even being asked. Unlike a lot of rockers, Mick Jagger didn’t suddenly start attracting women because he was famous; he became famous because he was already irresistible to women. Girls followed Jagger home from school when he was a kid, they followed him when he was a nobody blues singer without two shillings to rub together, and The Rolling Stones shot to fame because a handful of girls grew to hundreds to hundreds of thousands to millions. If many of the Stones’ songs are sexually crass – and a great many of them are – at least they come by it honestly. If they’re sexist – and a great many of them are – it’s not the bitter sexism of desperately insecure twerps whose ego depends on capturing and locking down a female trophy. It’s the cavalier attitude of a real Casanova, a man for whom trophies mean nothing, who doesn’t quite understand jealousy or commitment, who doesn’t want or need to lock anyone down and resents the pressure to settle down himself. If he doesn’t put the ladies on a pedestal or see them as particularly valuable, it’s because they’ve always delivered themselves to his door and he doesn’t see what the big deal is. John Lennon wrote about stalking and killing women who rejected him; Mick Jagger always did the opposite. The irony is heavy in the title of this one. This is a woman who plainly does no such thing as belonging to anyone. Maybe in your dreams, Bob. No conversation about songs about…well, anything… would be complete without Bob Dylan in it. In this case, it’s songs that seared themselves into my little half-baked child mind and became cornerstones of my future identity. (We’re also ostensibly discussing songs about women, which dovetails neatly.) Between this and the Velvet Underground’s Femme Fatale, I pictured in detail the woman I wanted to be, or maybe I recognized the person I already was and felt validated. “She’s got everything she needs, she’s an artist, she don’t look back” sang Dylan “She never stumbles, she’s got no place to fall.” She’s the ultimate muse because she’s got no interest in being any muse at all. She’s so radically self-contained that great men have no choice but to write songs about her, knowing that they’ll never really have her and she’ll never really need them. I’m an artist too, I get it. I know what inspiration feels like. Inspiration comes from wanting someone you can’t really ever have, or maybe you have them for a minute but they’re already halfway out the door even when they’re right beside you and you both know it. Artists write and paint and compose about the muse because the muse is unknowable. The muse is compelling because she (or he or they) is incapable of seeing the artist the way the artists sees her. If she needed him as much as he needs her, she wouldn’t be a muse, she would just be another needy person. Needy people reveal themselves, they open themselves up, they want to be known and seen and understood, they’re looking for someone to complete them, they’re ready to compromise and communicate and to be vulnerable and to sacrifice pieces of themselves in order to feed the union, and in that they are boring.  They’re the wives and husbands who do the right thing and stay and forgive and do the work of making it work and lose their own identity behind an ampersand. They’re suckers. Nobody writes songs about those people. Songs are written about the ones who walk away and remain themselves.

(Because of copyright reasons, this is a cover by the Tom Tom Club)